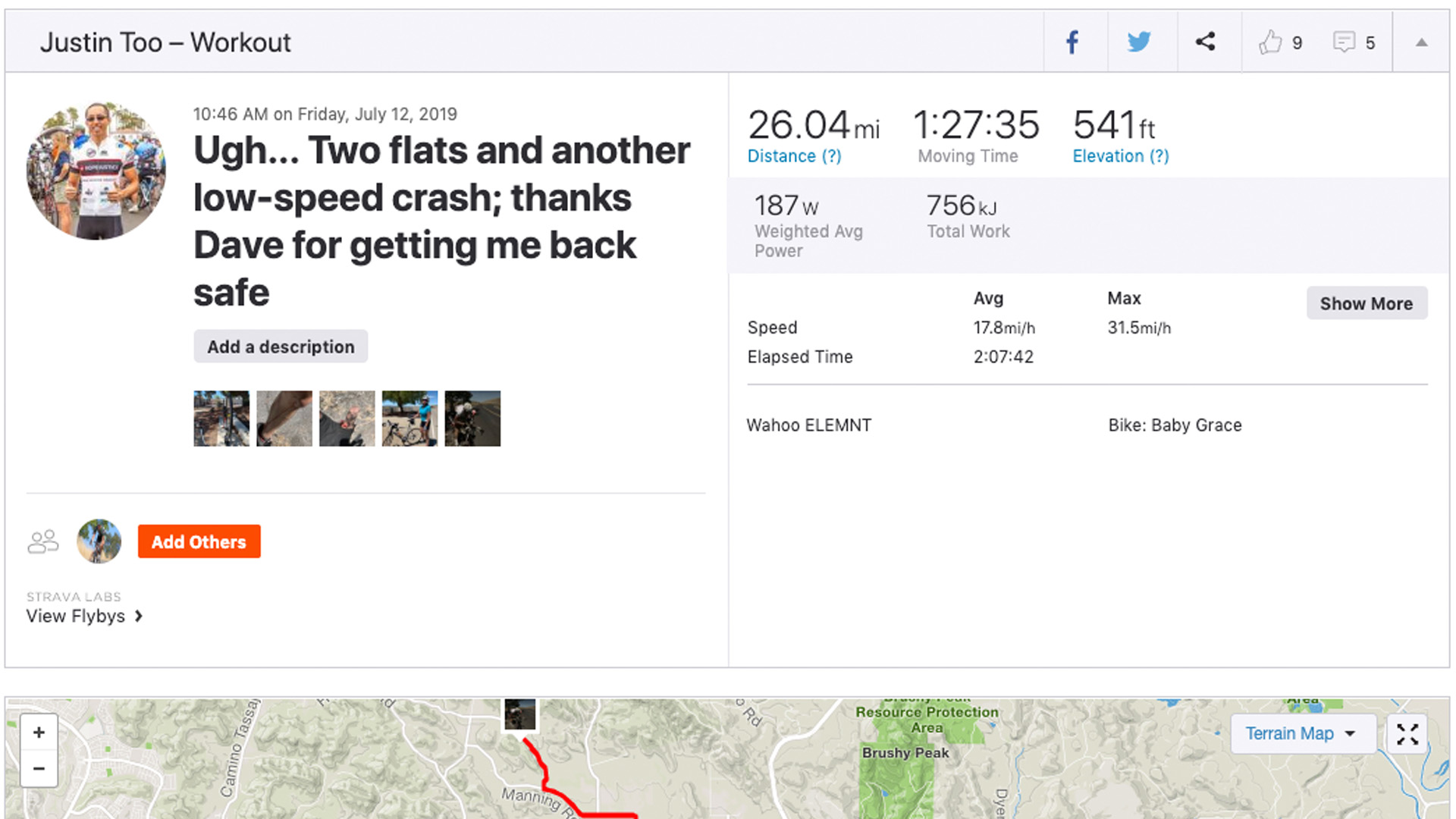 Today was just one of those days.

Actually, more like two of those days in one – two flat tires and one crash all in the span of about an hour on the same day.

I was excited for another hard training day today after a strong effort yesterday in my two-day intensity block.

I took off early to get my VO2 Max intervals in before hopping on with the Livermore Cycletrons group ride. My first 20 minutes were an easy warm-up from the Lab out to Raymond Rd on the outskirts of Livermore.

Unfortunately, soon after I completed my first interval, my back tire suddenly felt squishy. My initial reaction was to complain to myself, but since it was my first flat of the year, I calmed myself down knowing flats come with the territory.

Fortunately, I flatted just as I was passing one of the only country homes around so I was able to pull into their concrete driveway, safe from traffic and onto a clean, level ground to begin repairing my flat tire.

Just as I flipped my bike over with repair tools and spare tube in hand, the owner of the house pulled into their driveway. The friendly father asked me if I was okay and if I needed anything. I instinctively told him I was okay, but on second thought, I asked him if he might happen to have a bicycle pump that I could use in order to save my CO2 canister. He did.

Feeling positive, I began repairing my flat tire. I still had 20 minutes before the group ride was to appear on the horizon.

After taking out the tube, I inspected the inner lining of the tire and all I could spot was a minuscule thorn about 2cm long. I took out the culprit and quickly put in my spare tube, mounted my wheel back on the bike, and pumped up my tire to 100 PSI. All was good!

But then! All of a sudden I heard the sound of air spewing out of the tire I just fixed.

I quickly put my ear next to the tire, frantically trying to pinpoint the issue, but it was too late. Before I could complain again to myself, the tire was completely emptied out. I tried to re-pump it up but to no avail.

Now I was in a bit of a panic mode. Peering down at my Apple Watch, I realized the group ride was going to be passing me any minute now.

So I tried a bunch of random things to try to salvage the spare tube, but unfortunately I didn't have a patch kit on hand. I finally abandoned the spare tube and tried to re-pump the original tube. It held the air.

In Nascar-pitstop-mode, I swiftly swapped back in the original tube, pumped it up, gathered all my goods, gave back the pump, and hopped onto my bike.

Suddenly, however, out of the blue a friendly lady (Chris) pulled over with her triathlon bike and asked me if I needed anything. In a hurry, I simply asked her if she had a spare tube I could have but if not, I was okay. Chris didn't have a second spare tube but she did have a GU Gel which she gave to me. I didn't ask for it and didn't need it, but her care and generosity really made my day so I took it appreciatively and then took off down the road.

I rode carefully for about a half mile to see if the tube was holding up. And it was. Hallelujah!

Just then I could see the Cycletrons charging toward me. I spun up the pace and hopped into the group as they were passing me in the fast lane. Phew!

The pace was high from the outset, but I was feeling fresh since I wasn't able to do my interval workout. I still took the first five minutes easy to settle into the ride after being off the bike repairing my flats, but quickly things began to heat up so I began maneuvering myself towards the front.

But just as we turned onto Highland Rd, and the road began to tilt up, the pace began to ease. I was hoping to make it to the front to do one of my VO2 Max intervals, but the group never opened up so I just sat in about mid-pack.

Then all of a sudden I heard someone yell something. My ears shot up, my eyes peered forward, and I stopped pedaling.

In what was probably just a second, I tried to analyze the situation and see what was unfolding ahead of me. I couldn't see anything because there was a line or two of riders in front of me blocking my view. Then suddenly I heard something hit the road.

Next thing I remember seeing was a bike sideways skidding on the road, the guy in front of me braking to a halt in the back of him, and then me slamming on my brakes.

I stopped right into the back wheel of the guy in front of me and my momentum (probably 18-20 mph) carried me superman-style over the handle bars and I landed full force onto his rear wheel with my chest. Ugh!

I'm missing a few frames in my memories from the speed of the fall, but I remember feeling like my right hand also hit somewhere in the guy's drivetrain. Then next thing I know, I'm laying on the road with my bike next to me looking at my hand between my thumb and index finger. Ouch!

The group stopped for maybe twenty seconds and then everyone, including whoever else crashed ahead of me, got back on their bikes and continued the ride. (How did the innocent biker at the back end up being the most injured?!)

One of the regular riders, Dave, was kind enough to stick around and help me out.

We fixed my rear brakes and Dave got my chain back on while I rested on his bike. He then told me he had a first aid kit in his car nearby so I followed him in his slipstream a few miles back to the start. Coincidentally, just as we began riding down the road, Chris (the kind lady who gave me a gel earlier), was riding up the road. I waved to her and wanted to yell: "You wouldn't believe what just happened to me!" But I didn't - my chest was hurting too much.

I had a bad feeling. I knew I should have just called it a day after the second flat. At least, that's what my wife's gonna tell me when she sees me all banged up.

Sitting here typing this out, I can't help but chuckle a little. How did a sunny, happy Friday have such a sickening turn of events? I'm wondering to myself: "Was God trying to protect me from my repaired rear tire bursting later on in the ride on one of the fast descents?"

I'm just grateful to God I'm still alive and I should be well in no time at all to resume my training. A bit of road rash, whiplash, and a ruined workout, but three caring human beings and a free gel later... Just another one of those days! 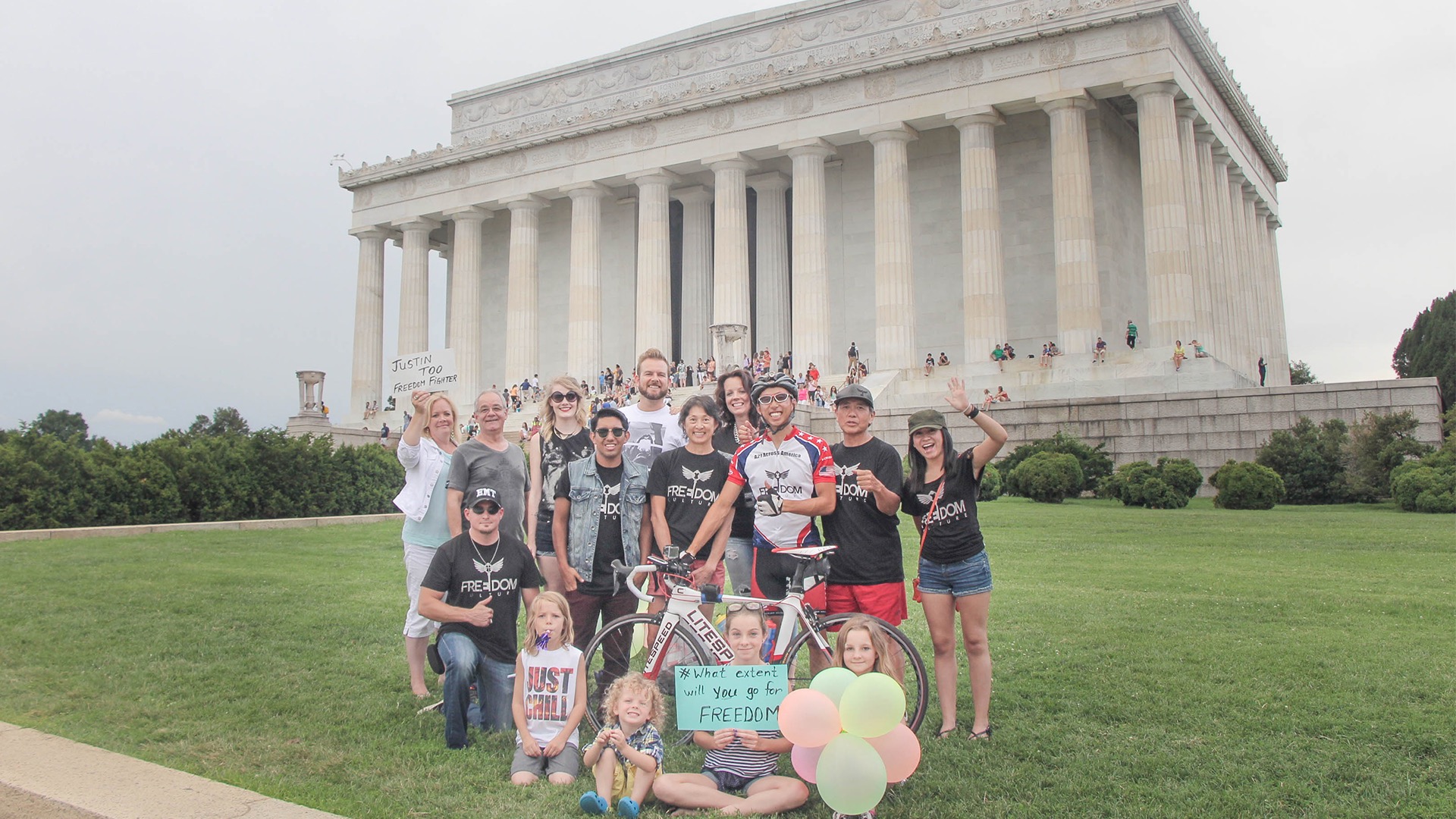 In 2014, I bicycled 3,000 miles across the United States of America to raise funds and awareness for anti-human trafficking. 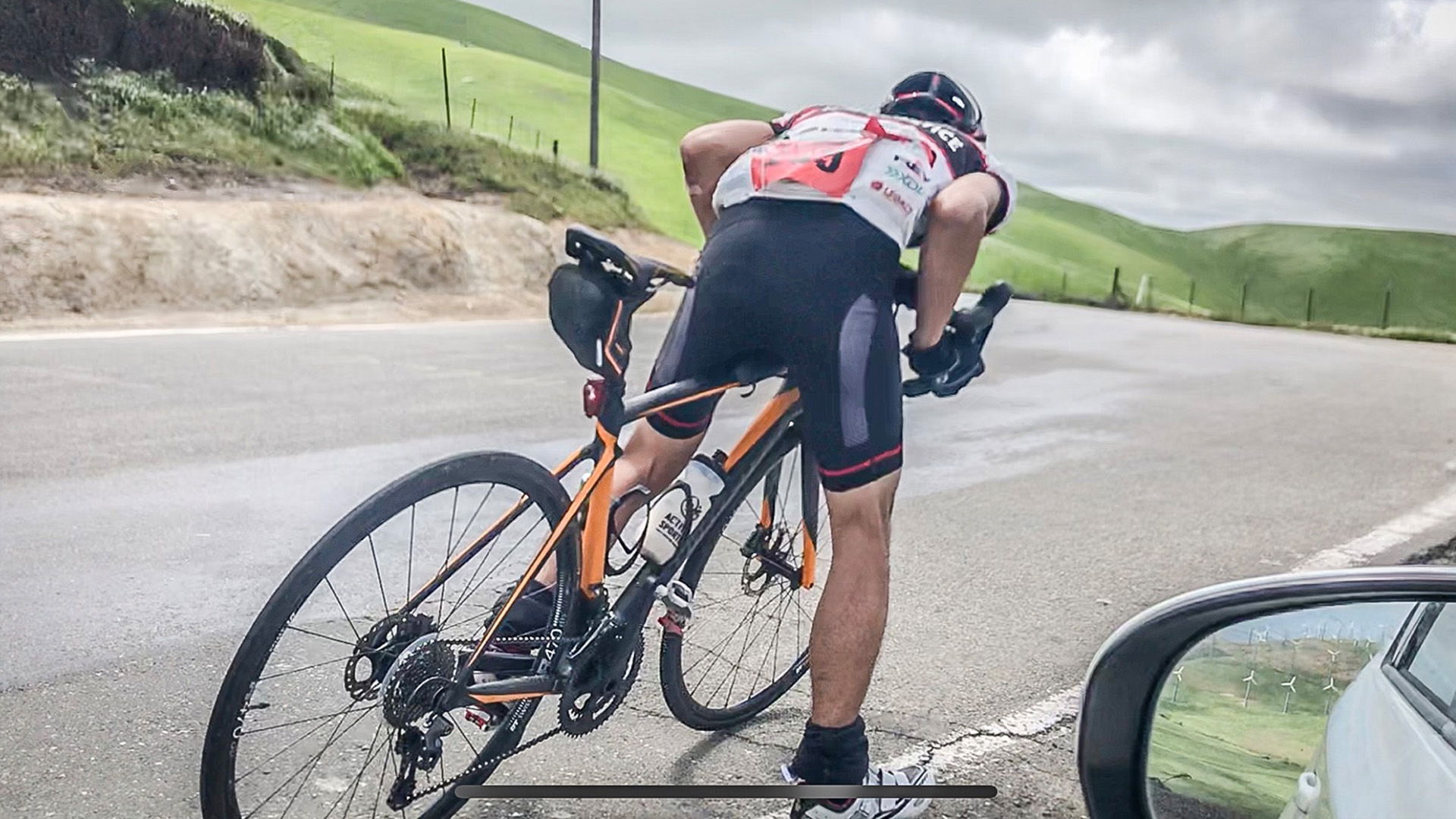 Passion, perseverance, and a growth mindset is all it takes to add grit to your own 3,000 mile journey across your God-given talents, passions, and purposes. 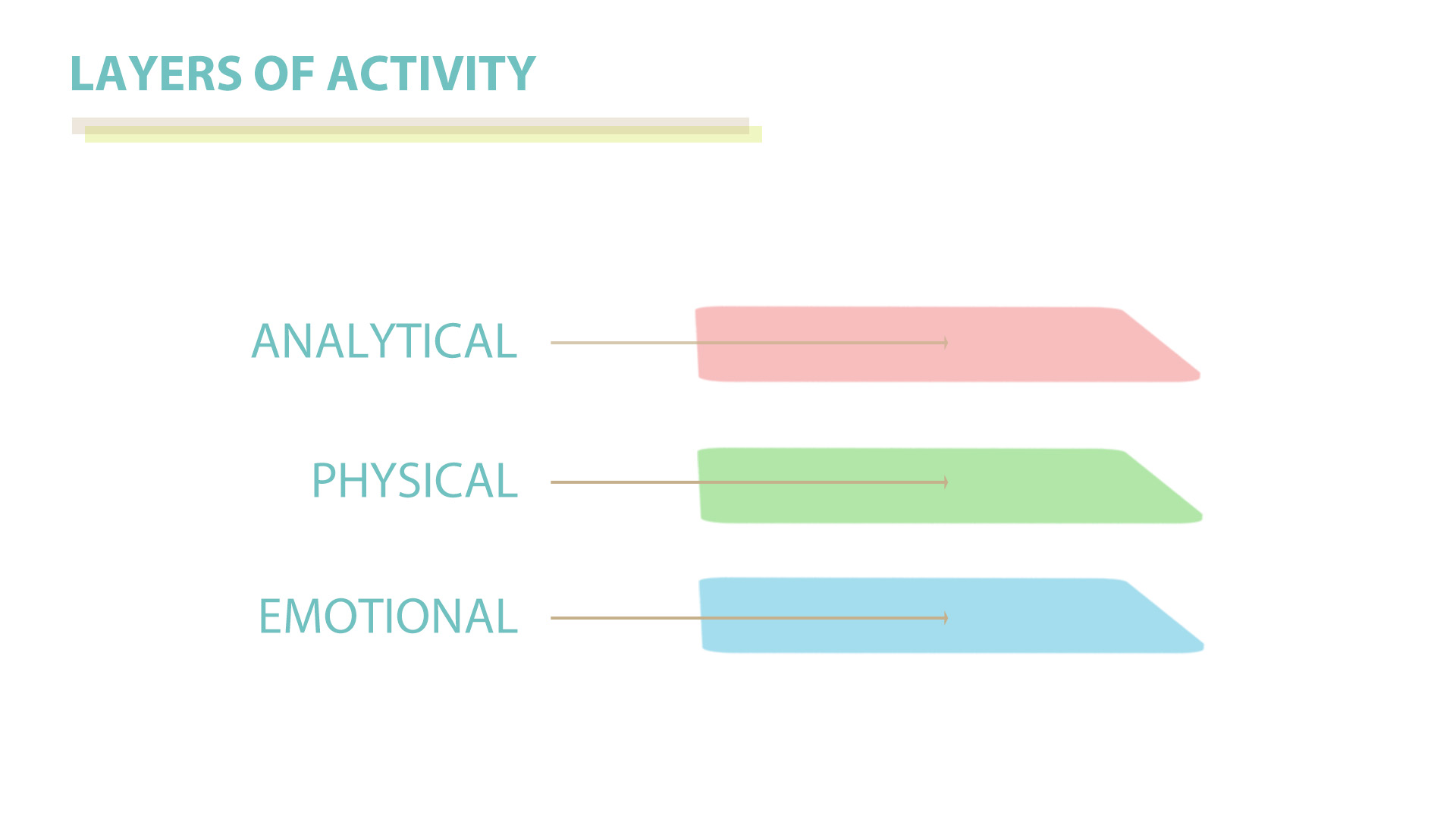 With only 24 hours in a day and a vast majority of them being spent resting, eating, and relaxing, wouldn't it be nice to figure out a way to squeeze out a little extra productivity from ourselves?